How to Create Friends Lists by City in Facebook

I have heard some Facebook users asking if there was a way to group friends by their cities. While this is possible to some extent, it is not possible the way this specific question asks. I will explain why below.

Unfortunately Facebook doesn't have a feature to create groups from your friends by the city they are living in or anything else such as their country, their gender, their occupation etc. in an easy way. For example, let's say you have thousands of friends that you are connected to on your profile and you want to quickly check the cities your friends are living in in an organized way. This is not possible since you can't create friends lists by city to later display them as a grouped list.

There may be a lot of reasons why you would need to group your friends based on their city or things like that. For example, you may be visiting a city and before doing a travel plans, you want to see which friends of yours are living in that city that you may want to visit. Or as another example, you received a job offer in a city that you haven't been to before and you want to ask your friends who live or lived in that city before making a decision. In any case, it would be nice to be able to create lists of your friends based on certain criteria in Facebook.

How to Find Friends Who Live in a Specific City

In another post, I talked about how you can easily search people by city on Facebook, people that are not your friend. You can use the same search methods explained on that post to find your friends who live in a specific city.

For example, to find your friends who live in Los Angeles, simply enter the following into the top search box:

My friends who live in Los Angeles

This query will return all your friends who currently live in Los Angeles and who are sharing their location information with their friends. Remember that you need to be logged in, in order to make searches. You can also find if any of your friends previously lived in Los Angeles, using the following query:

My friends who lived in Los Angeles

In most cases, this way of finding your friends based on their cities would be better than manually grouping them, as many people move to other cities in time, which will render your groups to be not accurate. This real-time search based on the current city they are living in will always return the most up-to-date list of friends.

How to Create Lists of Friends by City

Step 1: Go to your Friend Lists page, which is located at: https://www.facebook.com/bookmarks/lists

By default, Facebook has a couple of lists that you may find useful, such as Close Friends, Acquaintances, Family and the city you live in.

Step 2: Create a new list by clicking the Create List button. This will open a popup window where you can enter the list name and select your friends to add to this list by typing their names in the Members textbox.

Once your city list is created, from now on you can continue to update this list (and any other city lists you create) manually by adding and removing friends as you wish. 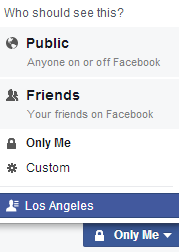