Apache vs. Apache Lounge: Which One to Choose?

If you are planning to build your own web server, you can choose to install the official Apache version or a third party version such as the Apache Lounge. In this post, I will talk about which one to choose in detail.

Apache is an open-source HTTP server software developed by The Apache Software Foundation. About half of all the active websites that you can access on the Internet today are hosted on Apache web servers (source: Netcraft's Web Server Survey).

On most commonly used web hosting platforms, whether they are built on Windows or Linux based operating systems, you can find Apache installed by default as the server software. Since it is open-source, you can also download and install Apache freely on your server platform (your local computer or private hosting space) if you are building your own custom web server to host your websites and web applications.

Apache is officially developed and maintained by The Apache Software Foundation as mentioned above; however, naturally as in most open-source software, there are third parties who contribute to the development and improvement of Apache HTTP server such as the Apache Lounge project which provides Windows binaries and third-party modules to the web server community. Assuming by the fact that you are reading this post to help you decide whether you should use Apache or Apache Lounge, you already know about Apache Lounge. However, if this is the first time you are hearing about it, then you should rest assured that it is a safe, secure and actively maintained project with a large community and user base.

Actually, this is not the type of comparison where you have to choose either one or the other as the two are not totally different things. Apache Lounge just compliments some of the things that the official Apache version leaves for the community to handle the way they wish. Therefore, the comparison is more about what you need on your web server, which requirements you have and which features you want, hence find the best Apache version for your project.

Just as a side note, as of writing this post, the latest Apache versions are Apache httpd 2.4.18 for the 2.4 release and Apache httpd 2.2.31 for the 2.2 release. 2.4 is the current active release and if you don't specifically need the 2.2 release for your project or if you are not sure which one to choose, you should install the most up-to-date stable 2.4 release, which is 2.4.18 at this time. 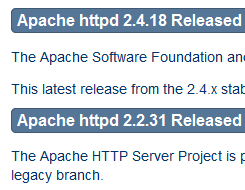 Now, let us come back to our main topic of why we are trying to find an answer to the question of choosing between Apache or Apache Lounge.

As it is also made clear on the official instructions page for Using Apache HTTP Server on Microsoft Windows, what the Apache HTTP Server Project provides is the source code of Apache (they do not provide binary packages), which is available for download on the following page:

The source code of a software is not enough to run it; the source code has to be compiled in order to be installed and to run on your system. What this means is that after downloading the Apache source code from the official project website, you will need to compile it before you can use it. If you are knowledgeable about compiling software source code or if you would like to learn how to do that, then you can choose to use the official Apache version from Apache HTTP Server Software Project page, by following these instructions for the compilation.

Compiling source code may not be an easy task especially if you have never done it before, besides it usually requires other software to be installed on your system. Your other option is to go with an already compiled version of the software. In our case, it is the Apache Lounge version as they provide the compiled binaries for the Apache HTTP Server Software. You can think about it like a group of developers took the source code from the official project site, compiled it and made it ready for users who would like to skip the compilation step and get the binaries which are ready to be installed on your system without any extra steps.

With the light of the above points, if you want to start with the source code of Apache, compile and install it yourself, you should choose the official Apache version at:

If you don't want to get involved with compiling source code and just want to start with a ready-to-install binary package of Apache, you should choose the Apache Lounge version at:

Furthermore, Apache Lounge provides a number of handy modules such as FastCGI, Tomcat connector, bandwidth limiter, application firewall and more. You can easily download the Apache Lounge binary on this page depending on your Windows build (32bit or 64bit). 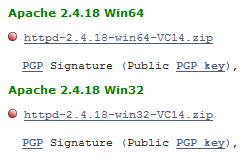 If you need detailed instructions about installing Apache, you can check the following posts too:

What is left now is to decide between Apache vs. Apache Lounge before you start your next web project.