How to Take Screenshots on an Android Device

In this tutorial, I will teach you how to easily take screenshots with your Android phone or tablet by demonstrating it with the help of a screenshot taken by a Samsung phone.

Taking a screenshot on your mobile phone might be something you may never need; however, knowing how to do it might still be handy in case you need it just at a time you wish you had known how to do it. There are many cases where the ability to save a copy of your device's screen would be highly useful.

For example, you may want to store the messages your friend sent to you via an instant messaging app, or you may want to share a screenshot of a game that you are playing with your friends, or perhaps you are creating a design visual and need to take screenshots of a website or web application to show how they look on your mobile device. In any case, remembering which buttons to press when you needed to take a simple screenshot on your Android device surely wouldn't hurt.

To give an example from myself, I recently started writing tutorials about Android and some mobile apps such as the Instagram app. In those tutorials, including this one you are reading right now, I needed to use screenshots from my Android phone in order to be able to better demonstrate what I needed to show. I needed to search multiple websites to learn how to do that, hence I decided to create this tutorial to save you some time.

Now, let's see how you can take a screenshot on your Android device.

Taking a Screenshot on an Android Device

First of all, you should understand that all mobile devices may show difference in terms of their appearance, available external buttons, their operating system and features. Even some different phone models of the same company may show difference in how things work. Keeping that in mind, the following methods may or may not work on thousands of different mobile devices built by different manufacturers such as Samsung, HTC, LG, Sony, Asus or other companies.

During my research, I came across two methods for taking a screenshot on Android devices. The first method didn't work on my device but the second method did. I will include both methods in case one of them fails for you too. By the way, my test device is a Samsung Galaxy S3 Mini with Android 4.2.2.

As mentioned above, this method didn't work for me but from the comments that I read on other websites, it seems to have worked for a number of users with different phone brands and models. So, it may work for you too.

If the first method doesn't work for your device, you can try the second method.

In this method, you press the Power button and Home button at the same time until the screenshot is taken. You will notice the screen border flashing with a white border and then you will see Saving screenshot... notice at the top and Copied to clipboard notice at the bottom like the below screenshot shows: 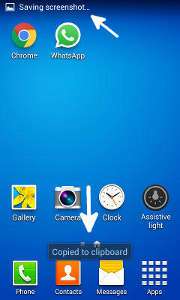 You may need to try a few times for correct timing while pressing the two buttons, continue trying till you hear the screenshot sound and see the above notices on the screen.

The created screenshots will be saved into a separate folder named as Screenshots in your Image Gallery (this may differ depending on your device).

TIP: You can also check the post about where are screenshots stored on Android to learn where the screenshots are saved on your Android device.

If neither method works for your device, you can try asking the customer support of your device manufacturer, or if you know someone who uses the same device, to get specific help.